Having already seen Conan demolish my eardrums at The Star & Garter in Manchester the night before, I chose to subject myself to further physical abuse like the sadomasochist I am! Whilst Conan were unbelievably loud and heavy, I think this show at The Ruby Lounge may have been even more loud, noisy and extreme! The two headliners Full of Hell and The Body, both explore new levels of extremity in Metal. Though they played separate sets tonight, the two have just put out a collaborative album "One Day You Will Ache Like I Ache" through Neurot Recordings.
______________ 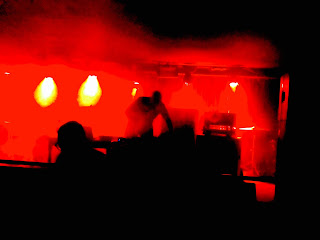 For about 10 years, Caina has been the recording alias of Andy Curtis-Brignell, but with the release of last year's highly acclaimed "Setter of Unseen Snares" album (one of my personal favourites of 2015), it feels like vocalist Laurence Taylor (also of Cold Fell and UVB-76) has become an official member. Being fellow Salford residents and genuinely lovely dudes, Caina are a duo I have a lot of respect for. The last couple of times I saw Caina perform live, they played as a 4 piece Metal band, hitting their stride with a fantastic main stage performance at Temples Festival in Bristol. Since that time, Caina has embarked on a bold and drastic change in sound, working with cult L.A. Harsh Noise artist Crowhurst and exploring their love of noise and Industrial much further.


Tonight's opening performance saw Caina reduced to the core duo, with Andy performing on stage with a laptop and array of pedals and switchboards. Throughout the whole show, vocalist Laurence stood bare-chested, often circling the crowd and getting in people's faces. The sound that they produced was insanely dense and loud, creating an aura of vibrations, rumbles and bone rattling, ear shattering noise. Underneath the overwhelming noise I could hear layers of pounding beats (reminding me of Haxan Cloak), ominous synths and I think Andy even grasped at chains to create a creepy and sinister ambience. Laurence is a vocalist who pours absolutely everything into his performance... His heart, his soul, his anger and his sweat. At one point he was on his knees right beside my feet, screaming in agony into the microphone. I even saw him wrap the microphone lead around his neck like a noose. He certainly channelled his inner Iggy Pop by delivering a very intense and scary display of pure rage and emotion.

As much as I enjoyed this bold change in direction, I did pick out a few shortcomings. Because their sound was so loud, noisy and dense, at times I found it very difficult to pick out the details and the intricacies that I know are in those compositions. This could have been down to the sound mix, though I did not experience any hindrance with The Body or Full of Hell, who also used noise and electronics in their sound. Also because Laurence spent the entire set doing vocals from within the crowd, I did notice that some people in the crowd were giggling awkwardly, especially when he confronted them face to face with his screams. Because he was on the floor level, I felt myself getting distracted from what Andy was doing on stage. Whilst I definitely see what Laurence was aiming to achieve, I think it would have been better if he had spent some more time on the stage too (which worked well the last times I saw them). Caina definitely give you 110% when they play live and this was one of the most intense and extreme performances I will see this year, but when it comes to extreme levels of noise and physical performances, sometimes less can actually be more. 7/10.
______________ 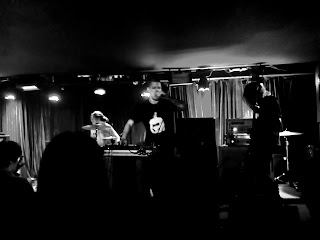 With each new generation of Metal bands, it feels like the genre keeps finding new ways of getting more extreme. Enter Full of Hell, a Noise/Grind quartet from Maryland, USA. Their sound perfectly managed to balance itself between Harsh droning noise and spastic bursts of lightning fast Grindcore. Each song they performed would typically go from insanely speedy blastbeats and visceral, dissonant guitar riffs, straight into abrupt dronings of fuzzy, buzzing noise created by vocalist Dylan Walker. The way their music would be lightning fast one moment and then super slow the next was sheer magic. This could have risked stopping the momentum of their set, but I thought it was a brilliant touch that added a real sense of nausea and unpredictability to their sound. During the Drone parts, I noticed their guitarist would add pinches of feedback, adding to the cacophony of noise. The band members were so in tune with other, making every sudden burst into Grind a seamless transition. There were even a couple of heavy as fuck Sludge sections thrown into the mix.

Full of Hell have found a way to take the blueprints of acts like Napalm Death, Pig Destroyer and Converge, and take them to a new level of extremity. They recalled cult Powerviolence/Power Electronics crossover band Man Is the Bastard. Full of Hell are one of the craziest and most dedicated bands I have seen in recent times, and I think they stole the show tonight! 9/10.
______________ 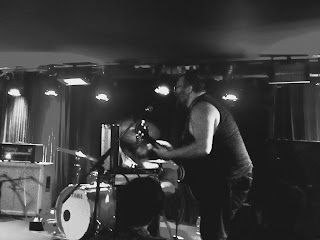 The Body is a colossal sludge duo from Portland, Oregon. Sonically they had similarities to Conan, who performed in Manchester the evening before. A slow as fuck performance of Droning Sludge and Doom riffs. Vocalist and guitarist Chip King opened the set with an escalating noise drone, performed on a nearby box containing pedals and switches. After a lengthy punishment of dissonant electronics and guitar feedback, the drummer finally kicked in with a slow and pounding beat. Chip's sole guitar roared to life, drowning the Ruby Lounge crowd in a wash of miserable Sludge chords, with piercing sinewaves and feedback iced on top. Chip King belted out a loud and ferocious scream that sounded like a mad parrot squawking!

Though Chip's guitar chords were relatively minimalist, the drummer in contrast was a bundle of energy, putting in techy fills and attacking his cymbals. His high energy kept the momentum of the slow riffs going. When both musicians were really going for it, there was an extremely thick wall of sound surrounding the room as noise levels probably verged on illegal. Though there was not much in the way of variation in their songs, the delivery was superb and really smacked you in the face. 8/10.
______________

A big thanks to all 3 bands, The Ruby Lounge, the sound engineer and promoter The Beauty Witch, for making this one of the best gigs of the year so far and certainly one of the loudest. Extreme Metal has a very bright future indeed. Lord help anybody who didn't wear earplugs tonight!
______________